Did you know that your version of Internet Explorer is out of date?
To get the best possible experience using our website we recommend downloading one of the browsers below.

Google Glass Gets a Makeover

Google Glass was first introduced in 2012, but didn’t become available to the public until May of 2014. Although Google Glass is currently available to any American citizen who wants one, the product is still in its beta stage, which means it is undergoing constant improvements and alterations. Google also states that while the beta product is available to the general public (for around $1,500), this is only a possibility while supplies last. Google is hoping for an official/international release date of a finished version of Google Glass for late 2014.

Wearable technology, although incredibly exciting, isn’t without its criticism. There has been hot debate over the dangers of distracted driving while wearing Google Glass, and privacy issues have followed the product since its inception, as it can be difficult to tell when the device is recording. That said; one of the biggest criticisms of Google Glass is its aesthetics! Whether you’re shopping for prescription frames or non-prescription sunglasses, everyone knows how hard it can be to find a style of glasses that compliments the unique features of your face. Previously, Google simply provided one style of frame for their Google Glass, but it seems they’ve finally come to their senses. 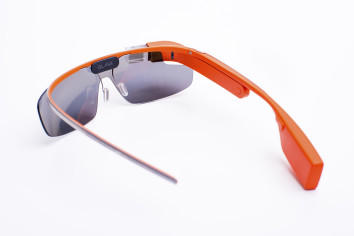 Earlier in this year Google announced that they would partner with eyewear brands to create new frames. As a result, they have begun releasing Google Glass in five different styles, with a variety of sunglass options. Google Glass is now also compatible with prescription lenses, which is a welcome addition for many prospective buyers who were previously on the fence about the product.

If you’re interested in buying Google Glass, you must sign up to become an explorer, and you should ensure your prescription is up to date. However, if $1,500 dollars is out of your glasses frame budget: don’t worry, we’ve got you covered! Visit our optical shop to check out our selection of high quality, reasonably priced prescription frames and sunglasses. They might not shoot high definition video, but they’re sure to have to looking great, and seeing clearly for years to come.

Select Brands from Our Optical Shop